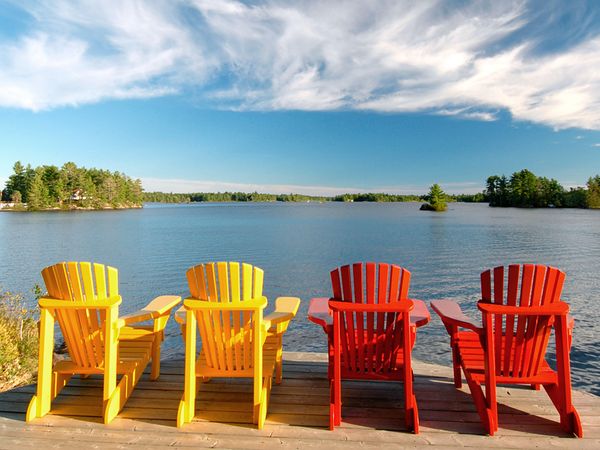 Huntsville (2011 population 20,000) is a town in the Muskoka Region of Ontario, Canada. It is located 215 kilometres (134 mi) north of Toronto.  The drive may seem far at first but honestly it is so worth it.  Dowload an audiobook and enjoy the scenery.

Town of Huntsville - Image Courtesy of the Town of Huntsville Huntsville is located in the hilly terrain of the Canadian Shield, surrounded by so many lakes. It is known as a popular summer vacation destination for boaters and cottagers, and acts as a western gateway to Algonquin Provincial Park. The city was host to the 36th G8 summit in May 2010. National Geographic's Travellers guide rated Muskoka as the topvacation destination for 2011. www.huntsville.ca

The area was first settled, and founded in 1869 by George Hunt, who built a small agricultural centre there. In 1870, a post office was built and the area was named Huntsville after Hunt, who became the first postmaster. Huntsville's economic development was stimulated by the engineering of a navigable water route north to from Port Sydney to Huntsville which opened in 1877. A railway route from Gravenhurst was built by the Northern and Pacific Junction Railway in 1885, which encouraged development and resulted in Huntsville becoming officially incorporated in 1886.


In the following year, the Muskoka Colonization Road reached this area. The central Ontario community became an important industrial area in the late 19th century and had several saw, planing and shingle mills, as well as a tannery. Today, the many lakes and hills in the area, combined with the town's proximity to both Algonquin Park and Toronto, make Huntsville and the Muskoka region a major tourist destination.

The muskoka chair on Lake of Bays near Huntsville is a magnet for and home to many acclaimed visual artists. Famed Canadian artists Tom Thomson and his peers, artists of the Group of Seven painted here frequently. Huntsville boasts a Group of Seven Outdoor Gallery with over 40 outdoor murals celebrating the work of these Canadian heroes. Local community visual arts group The Huntsville Art Society hosts many annual shows, exhibits & skills-sharing workshops throughout the year

Many summer camps for children such as Camp Tawingo, Muskoka Woods, Camp Nagiwa, Ontario Pioneer Camp and Olympia Sports Camp are within a few kilometers of Huntsville. Resorts such as Deerhurst Resort, where Shania Twain was discovered in 1988-1989, Hidden Valley Resort and Cedar Grove Lodge are located within the town's boundaries

There are also many new arts organizations and associations. The Huntsville Art Society is a not-for-profit membership of local visual artists. They recently opened up a new art gallery called 'The Art Space'. Edge of the Woods Theatre presents artistic works for, with and by the community in Huntsville. They produce an annual traveling outdoor theatre event, as well as facilitating many different community and arts education projects with local seniors and youth.

The town is especially proud of its new municipal centre and performing arts theatre, the Algonquin Theatre. The theatre provides a beautiful and professional space for local dance, music, and school activities.